Knowing the correct time for a specific location in Brazil can often be confusing. At one time, Brazil had four different time zones but, in 2008, things changed; boundries were redrawn and cosolidated, and the start and stop dates of Daylight Savings Time were standardized. These changes effectively resulted in three time zones. One time zone is only for Fernando de Noronha, an archipelago of 21 islands about 350 km (220 miles) offshore mainland Brazil in the Atlantic Ocean. This leaves only two time zones of concern to most people.

More than half of Brazil is in what is sometimes called the Brazil Eastern Time Zone or the Brasilía Time Zone There is some confusion about this because about half of the states in this time zone observe Daylight Savings Timeknown in Brazil as horário de verão or, often, simply hora de verão (summer time)while the other half do not. The exact start and end dates for Daylight Savings Time change every year and roughly correspond to the seasons in the Southern Hemisphere. 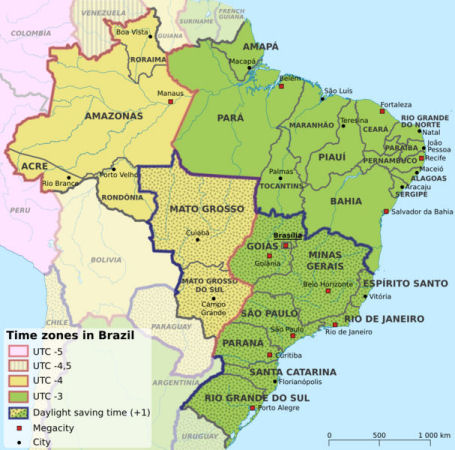